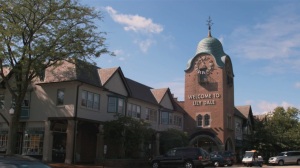 Lily Dale is a town that speaks to the dead and if you attempt to change their ways it just won’t happen.
Lily Dale is approximately sixty some miles from Buffalo New York, resting off road from intersate 90. Among the contrary beliefs of being out there publicly it is still how ever easy to drive by and not see or even realise the little gem stone of a town. Inside the town there is about a few hundred folks a small little settlement that will still cling to their religion and definite beliefs.

The town holds a religion that may have once had well over two million followers, now merely a few thousand.
The Definition of A Spiritualist
One who believes, as the basis of his or her religion, in the continuity of life and in individual responsibility. Some, but not all, Spiritualists are Mediums and/or Healers. Spiritualists endeavor to find the truth in all things and to live their lives in accordance there with.The belief that the dead communicate with the living, as through a medium.
It may  be said that women set the tone in the small town of Lily Dale. The victorian style houses are painted with screened porches, near by water fountains are all part of the scenery to take in.
When summer hits the tiny town then close to 20,000 visItors will pay a visit to the towns mediums. Lily Dale was founded in 1879, this makes the town the oldest spiritualist community in the world. It is a gated community that charges a small fee to enter its gates.

.
Visitors have spoken about the energy that does surround this small town, they oftenly speak of not being able to sleep real well at first or when staying there the first night or so.
Depending on who you may speak with, local residents have stated that they know and believed that there are houses to this day that contain energy vortexes. It’s also said that there is rich Native American sides to the surrounding town and areas and that they believed the spirits have came to stay.

By the early parts of the twentieth century,mediums were being exposed as frauds. Spiritualism could have died out then, but along came the first world war. World War 1 and also so did the flu of 1918, with millions gone or for those who lost their lives grieving family members wanted answers to their questions concerning the deceased. Mediums were once again turned to for answers of the after life and dearly departed.

Contrary to what some folks have written, most of the mediums in Lily Dale do not use speaking boards, hold live seances or speak in someone elses voice, but seem to control and use their own words and said voices. It is said that the use of the Oija Board is not used much and they felt it was not a good source of posative energy.

Lily Dale Assembly is now celebrating its 135th year. Each day of the season offers a series of events and experiences to bring information, enlightenment, hope and peace to those who open their hearts to receive.

Classes on a broad range of subjects related to the development of Man’s potential as a spiritual being are offered throughout the season. Thought Exchange evenings are designed to give free exchange of information as well as to answer the many questions of the seeker.

We are dedicated to the service of God, Spirit and Mankind says the towns people. This to the members of the Lily Dale Assembly, is the foundation upon which all else is built. We open our community to you that you may experience that which is for your highest and best. We encourage you to participate in the activities and to open your minds and your hearts to receive .http://www.lilydaleassembly.com/
This article may also be viewed on our Google page.https://plus.google.com/u/0/+EvanJensengracedog1/posts