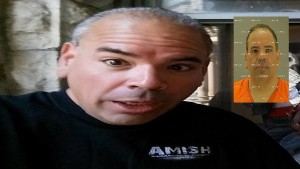 According to news sources, a former member and founder of The Amish Paranormal group was arrested and charged with having sex and attempting to have sexual intercourse with a minor, as local law had stated they believed based on computers and cell phone  electronics taken for further investigation the Amish researcher had been meeting and arranging meetings with a said minor for some time.

What I  found  disturbing was I knew Darrin Troyer. I feel for the family and the  minor that may have  been abused by Toyer. I can not imagine someone being capable of this and then gaining trust and mobility through social media sites and the deception he is a ghost hunter. Using the Paranormal to already do a dispicable acts of deception as this is sick, disturbing and in my own opinion there can only be one cure there.

I saw  a recent story inside the examiner this morning http://www.examiner.com/article/ohio-amish-paranormal-investigator-accused-of-having-sex-with-14-year-old-girl

A ghost hunter from Ohio is being accused of having sex with a 14-year-old. The man allegedly sent nude photos to the teen on Facebook and then they met at a nearby park to search for ghosts but ended up having sex instead.

Darrin Troyer of Dover, Ohio was arrested for having sex with a minor. The 48-year-old is being accused of sending nude photos to a 14-year-old on Facebook, then later meeting with the victim to have sex at a secluded location. Troyer claims that he thought the teen was an adult. He was charged with one count of unlawful sexual conduct with a minor which is a fourth-degree felony and currently being held in the Tuscarawas County Jail.

Troyer runs the Ohio-based paranormal group Amish Paranormal Society out of Navarre. Troyer said that they specialize in doing residential paranormal investigations, coming into people’s homes and gathering evidence of ghosts and the afterlife.

The teen’s family members found out that the 14-year-old was meeting with an older adult for sex and they contacted the sheriff’s department. A parent surrendered the teen’s computer to forensics to be investigated. Tuscarawas County Sheriff’s Detective Cathy Bickford took over the teen’s Facebook profile and continued conversations with Troyer posing as the teen.

Detective Bickford said that Troyer talked with the teen about ghost hunting and that they met at Dover City Park to look for spirits. After meeting at the park, the two ended up having sex. According to Chief Deputy Orvis Campbell of the Tuscarawas County Sheriff’s Office, they went to the park several times to meet for sex. Bickford posing as the teen, arranged to meet Troyer at the park on March 30 where Troyer was promptly arrested.

The Tuscarawas County Sheriff’s Office executed a search warrant to retrieve computers and a cell phone that Troyer used for the crime. Investigators applied for an additional search warrant to go through the devices to look for communication between the two. Detective Bickford says it is unclear how long Troyer has been meeting with the teenager but it has been going on for some time. If convicted, Troyer joins a long list of sex offenders involved in the paranormal hobby.

To further get a better idea of exactly  what has happened with Darrin Troyer this is a audio file link, that explains the charged mans bale was reset at 50,000 from 100,000. The suspects passport was seized and he was and is placed on house arrest, pending further investigations into the sex scandal that he is been implicated in

Further reading a statement by WJERTV2.com Headline News
TUESDAY, APRIL 7, 2014 TROYER WAIVES PRELIM, BOND REDUCED
NEW PHILADELPHIA – A Dover man, accused of having a sexual relationship with a teenager, has had his bail reduced. 48-year old Darrin Troyer waived his right to a preliminary hearing Monday in New Philadelphia Municipal Court, though his $100,000 bail was lowered to $50,000. Tuscarawas County Assistant Prosecutor Pat Williams says pre-trial release conditions were also established requiring Troyer to remain on house arrest if released and be monitored with an ankle bracelet. Williams says Troyer’s computer, cell phone and tablet were seized and sent to the Bureau of Criminal Investigation when Troyer was arrested last week. Williams says the case could take longer than usual as BCI is currently running about three months behind. Troyer is charged with unlawful sexual conduct with a minor for the relationship that allegedly began over social media. His case was bound over to a Tuscarawas County grand jury.

I  (Evas jensen) have personally tried to contact the Amish paranormal group, while they seem to have taken down their websites and are not available for further comments.

We will be following this story as more news comes in and is readly available.

Evan Jensen “Beyond The Edge Of Reality”

This article may also be viewed on our Google page.https://plus.google.com/u/0/+EvanJensengracedog1/posts